Spring storms made the afternoon overcast and rainy. The meditation hall was dimly lit. I could tell from the posture of bodies around me that I was not the only one struggling to stay alert. Our teacher Santikaro started talking about strategies for brightening the mind: one can imagine a light; one can recall a person or an idea that evokes confidence; one can recall one’s own virtues. That’s what reminded me of Mahāgosinga Sutta, MN 32.

This sutta begins as a number of monks, after a long afternoon of solitary meditation, start drifting together at dusk. This seems to have been the daily pattern: mornings were for chores, almsround, and eating; the long afternoons for individual meditation. Around twilight, monks sometimes sought each other out, maybe for silent company and shared practice, maybe for dhamma conversation: sharing what they recalled of the teachings, how they understood the teachings, how they were applying those teachings in their practice.

Sāriputta has a slightly different idea. He greets them graciously, then asks a question eliciting some statement of the dhamma from each of them: What kind of practitioner could light up the surrounding woodlands? He asks Ānanda first:

I’m not sure whether dosinā ratti must be read as a moonlit night, as Bhikkhu Bodhi translates, or just as a clear night which might be dark except for starlight. At most, we have the glaring light of the full moon in the flowering canopy above, and deep shadows beneath the trees. (Have you walked in the woods at night recently? Without a flashlight, letting your eyes adjust?) 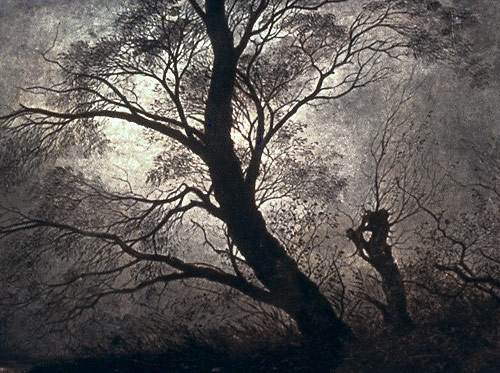 So there they are: six homeless meditators sitting in the dark.  Sāriputta invites first Ānanda and then each of the others to imagine a light capable of illumining the entire forest—and that light as originating from a practitioner like themselves, from the virtues of such a practitioner.  It is at once an invitation to imagine light and to imagine something that inspires brilliant confidence. Each one answers with, essentially, a description of his own strongest virtues and abilities—extending the invitation to include recalling one’s own virtue.

He asks Moggallāna last, and Moggallāna’s answer comes very, very close to reflecting on the relational practice (or, dare I say, meditative play) in which they have been engaged together:

Although Moggallāna specifies two (dve) monks—and there are suttas recounting such dialogues between himself and one other, often Sāriputta—his response describes the dynamic of these monks’ interaction. Doing exactly what they were doing—right there, right then—could light up the forest!

The metaphoric association between interpersonal talking practice and light is found in other places. In the tens of the Aṅguttara, the Buddha is reported to say, “There are these ten topics of [proper] conversation. Which ten? Talk on modesty, contentment, seclusion, non-entanglement, arousing persistence, virtue, concentration, discernment, release, and the knowledge & vision of release. These are the ten topics of conversation. If you were to engage repeatedly in these ten topics of conversation, you would outshine even the sun & moon, so mighty, so powerful—to say nothing of the wanderers of other sects.”  (AN 10.69)

The events of that clear and fragrant night continued. After each monk had spoken, they all went to see the Blessed One, recounting their entire conversation for him. He approved their stories of virtue and attainment, refused to choose between them, and added his own response to Sāriputta’s question: “When a bhikkhu has returned from his alms round, after his meal, he sits down, folds his legs crosswise, sets his body erect, and establishing mindfulness in front of him, resolves: ‘I shall not break this sitting position until through not clinging my mind is liberated from the taints.’ That kind of bhikkhu could illuminate this Gosinga Sāla-tree Wood.”

Thus the story ends with praise of diligence; Moggallāna’s lifting up of conversational interaction concluded only the central movement. The Buddha’s coda, by emphasizing diligence, popularized the subject matter of their conversation. And his response contextualized all practice—including such beguiling side effects as lighting up an entire forest—as subordinate to the one goal, liberation.

Yet these monks’ practice that evening bears close examination. This is not just an old tale, nor an account of how people entertained themselves before books, electric lighting, and the internet. There is a pattern here that we might follow, or adapt, or play with. These  monks were supporting and steadying each other in powerful ways that are both human and necessary.

On this specific occasion, Sāriputta proposed, and the rest gladly followed, a relational approach to working with their circumstances. Together, they investigated qualities of the virtuous mind—a shared version of one of the satipaṭṭhāna practices—and brightened their own and each other’s minds in the process. And—who can say?—perhaps their shared inquiry really did light up the surrounding forest.

You might want to reflect on your own situation in this way, privately and if possible also with friends: Where are you? What sort of practitioner could illumine that situation? How might your virtues, your goodness, begin to light up your surroundings? 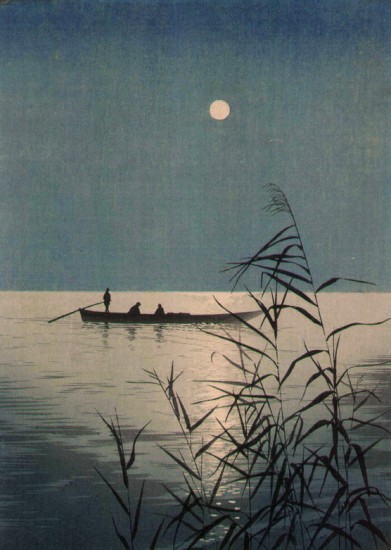 (translations of MN 32, Mahāgosinga Sutta, are Bhikkhu Bodhi’s; translation of AN 10.69 is Thanissaro’s)

One Response to Lighting Up The Night: Mahagosinga Sutta, MN 32