Play As a Root of Sati (Mindfulness)

The simpler forms of human play closely parallel animal play; let us take these shared forms as paradigmatic. Animal play includes bonding play between a mother and her young, or between individuals who otherwise might be competitors; movement play, both solitary and social, exploring the body and its capabilities; play with objects; and mock aggression such as wrestling, play-fighting, and chasing. Mammals may engage in the largest amount of play; that of primates and of social carnivores seems especially well developed. Human play includes all the basic forms of animal play along with more complex elaborations.

Play does not make an immediate or obvious contribution to survival. Certain forms of play rehearse behaviors or develop skills used in adult life, and develop the brain in specific, wholesome ways. But these are long range goals—developmental and evolutionary goals—that are hidden from the individual choosing to play. Play does not produce visible, practical gain or profit; it is undertaken by the playing individual for its own sake. As Jeffrey Moussaieff Masson put it, play is both a sign and a source of joy.

At least one key meditative ability—the ability to monitor attention and regulate it according to an agenda—is necessary to play, and is developed in play.

Mock-Aggressive Play and the Complex Regulation of Attention

Many forms of play, both animal and human, involve mock aggression: chasing and fleeing, wrestling, pretend fighting. These forms of play help develop the ability to engage in serious contests—but for play, the ability to be not-serious and to observe restraint is essential. Playing animals mitigate the force of play attacks. Sometimes they reverse roles to prolong the play: a winner begins to act like a loser, or a successful pursuer suddenly turns and flees. In the play context, elements of aggressive behavior are often fragmented, reordered, and repeated in ways quite unlike serious aggression. 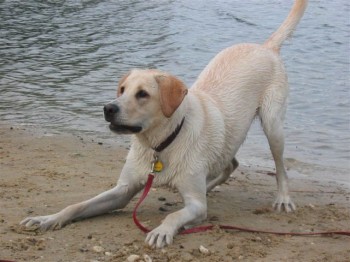 Specific play signs are used to communicate the difference between serious aggression and play. Dogs and their relatives use a distinctive stance, the “play bow” familiar to most humans, to invite play. They repeat this stance whenever an action might be misinterpreted, to clarify or reestablish the play context. Chimpanzees use a distinctive facial expression for the same purposes: a wide open mouth with lips drawn over the teeth. Other animals use other play signs.

Some playing individuals do hurt their playmates, whether from getting carried away, forgetting, or opportunism; after a few repetitions, potential playmates generally avoid these individuals. If you get lost in the pretended aggression and fight in earnest, play is over for you. Yet if you avoid this danger by doing something safe—curling up for a nap, say—play is over for you. For mock-aggressive play to continue, animals (or people) must continuously guide their behavior by two criteria: the imagined context (“this is a play FIGHT”), and the imaginary status of that context (“this is a PLAY fight”).

Imaginative play seems less widespread in the animal world, though not wholly absent. Dolphins in captivity have used a feather to play with water jets in their pool, taking the feather to the outlet and chasing after it when the water carried it away. My cat Summer used to hide the mice she killed; at night she would bring out a dried-up mouse and toss it up into the air, scurrying across the dark livingroom as if it were alive and able to escape from her. The gorilla Koko went through the motions of brushing her teeth—holding a toy banana instead of a toothbrush. The chimpanzee Moja, who used sign language and knew the word “purse,” once put a purse on her foot and walked around signing “That’s a shoe.” But our knowledge here is slight—and may depend upon contexts we ourselves have constructed.

The imaginative play of human children often sticks close to known realities: playing house, playing with dolls, playing at physical forms of work, reenacting dramas from real life or from media. Such play imitates and digests the roles and situations to which the child has been exposed. Imaginative play can even make possible a subtly changed relationship to a real present situation: Vygotsky wrote of two sisters deciding to play at being sisters, and of children who did not want to go to bed saying “Let’s play that it’s nighttime and we have to go to sleep,” helping themselves and each other enter the otherwise unwanted routines of settling down for the night by invoking the play/reality dichotomy. (Is some self-reflective awareness set up by that very invocation?)

Keeping an imagined agenda or context in mind—in mind continuously enough to guide behavior as it is improvised moment by moment in the presence of considerable stimulation—is a significant feat of attention. Clearly, it requires certain kinds of memory—though not the memory involved in knowing the multiplication tables, or reciting a poem, or recalling what you were doing when you heard about 9/11. (It would be interesting to determine exactly which kinds of memory are involved—probably elements of both procedural memory and working memory?—but that is another story.) The feat of remembering, monitoring, and balancing required by mock-aggressive and other imaginative play is one that animals and human children manage regularly.

This feat is closely related to mindfulness.

The Pali word usually translated as “mindfulness,” sati, refers to a quality of attention closely related to memory and recollection. (“Mindfulness” is also used in other, often narrower, senses by some contemporary meditation teachers; I am here using it simply as the English equivalent of the Pali term sati.) In the Buddha’s teachings, sati is imaged in several ways. Like the gatekeeper of a town, who monitors people coming in or out but does not follow them, sati monitors input from the senses but does not get caught up. Like a cowherd who guides the herd away from harm and into appropriate pastures, sati restrains thought and activity and directs them into wholesome endeavors. Like a post to which several disparate animals are securely tied, sati moderates the distractions of the senses and of the mind.

Sati is what allows us to recall or recollect a theme and to hold it in the mind for reflection. With sati, we can observe the changing conditions of the body, pleasant and unpleasant feelings, states of mind, and wholesome and unwholesome qualities as they occur in the mind. We can watch what is going on in the mind without getting lost in it; if we decide to do something about what we observe, our actions do not spring simply from being overwhelmed.

When animals engage in mock aggression, we do not know what they are aware of—but we know that the play ends for an animal that gets lost either in aggression or in avoiding aggression. Animals at play exhibit functional if inchoate awareness of the relation of their behavior, from moment to moment, to both the imagined context of play and the imaginary status of that context. They are exploring their own and each others’ bodies and physical capabilities, exploring emotions of pleasure, aggression, and bonding, and finding out how to maximize the fun of playing. (Rough explorations of body, vedana, citta, and dhamma?) They are doing so by means of behavior that is not directly linked to survival. In fact, play behavior, with its balancing of multiple frames of reference, is arguably more complex than the adult survival behaviors that it rehearses!

Among the wholesome qualities of mind that sati is able to observe is the presence of sati itself. In fact, this reflexive awareness of awareness is sometimes asserted to be essential to sati. A certain humans-only je ne sais quoi seems to be necessary to develop enough of this reflexive awareness to qualify the play stance as sati in the fullest sense of the word. But the common heritage found in play looks, to me, like the basis upon which the fullness of sati is developed.

Mindfulness, Play, and the Price of Cheese

If it is true that play is the behavioral, developmental, and neurological basis of sati—even partially true—we ought to be able to learn some things about both from the relationship. Here are a few corollaries I can think of:

What else can you imagine? How could one test these corollaries? How might one apply them? Are there naturally occurring situations where some of these dynamics are visible?

This is intended as a thought experiment—and a playful one!—so please join in.

As for mindfulness/sati, I do not know a better resource than Analayo’s book Satipaṭṭhāna: The Direct Path to Realization (Birmingham, UK: Windhorse, 2003).

_____________________
1/30/13: This morning I began a couple of galleries of images of play on Flickr: Body Play, Object Play and Imaginative Play. The images available on Flickr only accidentally correspond to my purpose, so my curation of this resource—adding, subtracting, annotating—will likely go on for a while.

One Response to Play As a Root of Sati (Mindfulness)