The Scent of Green Papaya

This film depicts a sense of present-moment wonder—as a durable habit, not just some anomaly triggered by happy circumstances—and inquires about its role in the life of a human growing up.

Made in 1993 but set in Vietnam in the early 1950s and early 1960s, The Scent of Green Papaya falls into two halves, ten years apart. In the first, its central character Mùi is perhaps ten years old; in the second, Mùi has reached young adulthood. It opens with Mùi walking from her home village into a city, looking for an address that she finds at the end of the day. Her father dead, she has left her mother and younger sister and come to the city to work as a servant.

The film is very beautiful. Filmed on a sound stage in France, its sets accurately portray the thin-walled wooden architecture of Vietnam (or, so my Vietnam vet friend Paul tells me). Sometimes we see into a room through a window, or look out through a window at action in a courtyard. Often we see through multiple windows: from outdoors across a room to a courtyard beyond. There are lattices and shutters and mosquito nets. None of the surfaces seems substantial: there are layers behind layers behind layers, all constructed, sometimes quite lovely, but always just a bit flimsy.

The child Mùi is seen looking at things—looking long, carefully, with wonder, and with a mild joy. We are shown both the expressions on her face as she looks and the objects of her gaze. There is nothing to be gained from her objects of attention: she watches a little sap dripping from the broken stem where a papaya has been harvested; she watches ants carrying crumbs away. As she watches, an expression of neutral interest is gradually replaced by a slight smile. (Is that bright, clear, even attention inherently smile-producing?)

The family Mùi has taken service with is troubled. A middle-aged woman runs a tailoring shop that supports the household. Her husband shuts her out to play traditional music and does not leave the house—except occasionally, when he takes the household’s assets and disappears for extended periods. His mother, widowed after only a few years of marriage, stays upstairs and occupies herself with Buddhist devotions. The young sons of the family exhibit petty cruelty. A photograph shows a young girl, a daughter who died young; the father forbids talk of her. Had she lived, she would have been about Mùi’s age.

The Interpersonal Force of Attention

Ten years later, Mùi is a young woman working for the same family. Close attention in the moment, combined with just a thread of rapture, is clearly still her habitual response to life. The mother—now the old woman of the household—falls into depression and Mùi sits with her. She looks smiling into the older woman’s face with the same open wonder. This quality of close, bright, even attention evidently has some force in relationship: the older woman’s depression, verging on catatonia, begins to dissolve. 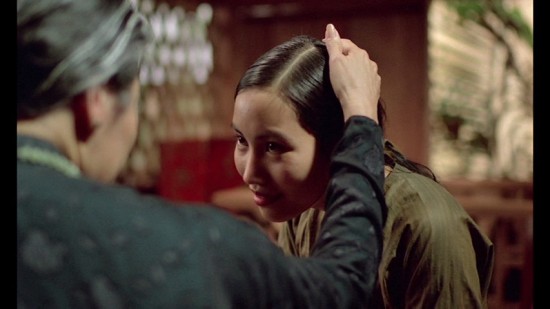 The oldest son and his wife now run the household, and decide it would be better if Mùi took service elsewhere. They arrange a position in the home of a friend, a young musician whom we saw the younger Mùi admiring. The mother gives Mùi a red brocade dress and some jewelry—her own wedding outfit?—that she would have given the daughter, had she lived.

Once in her new workplace, Mùi conveys a sense of steady contentment as she cooks and cleans and serves. There are some scenes of very innocent sensual joy: alone in her room, she washes her hair. We also witness her habitual, gratuitous care for the life around her: whenever she sees the frogs that appear everywhere around the courtyard and open air kitchen, she splashes water on their backs. Turning on the lights for her employer, who is absorbed in composition at the piano as afternoon darkens into evening, seems simply of a piece with this.

There are also some scenes in which she tries on possibilities, identities: she almost puts her foot into a sexy high heeled sandal her employer’s fiancée has left in the house, then recoils. She does put both feet into a pair of her employer’s shoes she has just shined; seated, she turns her legs one way and then the other to look at her feet in his shoes. Later, she tries on lipstick and the red áo dài her former employer gave her.

Meanwhile, the composer seems to have noticed something about her. In an enigmatic scene, he makes some association with a sculpture of the Buddha’s head that sits on his piano. He takes the sculpture in his hands and looks intently at the face. Sketches of a face begin to appear around the house: a calm face with just a slight smile. Is it the Buddha’s face and smile? Is is Mùi’s face and smile? Is it both? A predictable series of clarifications ensues, leading to a happy ending.

Anomalous People and the Making of Myth

Mùi, both as a girl and as a young woman, habitually responds to her world with present-moment attention accompanied by both wonder and good will. What is going on in such attention, in such a smile? How does it happen? How is it sustained? What can or should become of it?

We do not learn from the film what formed this habit: Mùi simply enters the story—perhaps, entered life—from a different starting point. And, although she encounters some challenges, we are not shown this quality as maturing by stages; the plot does not track its development or difficulties. It tracks, instead, a romantic theme—one possible outcome of such attention’s interpersonal effect. (And the film might have been simply unintelligible, to almost everybody, if it had attempted to do otherwise!) 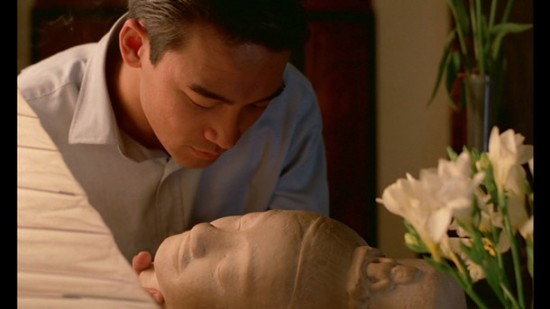 Certain people just seem to begin life from a different starting point: gifted with an extraordinary measure of wisdom or spiritual maturity. These people regularly provoke theories of reincarnation to explain them. Who has not encountered a child that some identify as an “old soul”? I am not convinced by such mythologies—how would I know?—but I do know that such unexplained differences exist.

So we are offered neither an explanation of Mùi’s characteristic style of attention nor much tracing of its development. Yet the depiction of this element of Buddha-like contemplation as the central attribute of the main character of a film is compelling. The amount of time this film devotes simply to Mùi’s gaze and to the objects of her gaze is quite remarkable. The Scent of Green Papaya presents an extended visual meditation on a certain quality of clear, bright, kind, and just faintly rapturous attention.

This entry was posted in book/article/movie reviews and tagged attention, joy, movies, smile. Bookmark the permalink.

Responses to The Scent of Green Papaya